Have you been fishing for a precise flavour for quite a long time and though you tried your best to end it, you couldn’t really satiate your taste buds at the end? Well, I have been having the same feeling for the past two years on a dish that is the most popular food of West India especially Mumbai! Yes, you guessed it right…it is the Pav Bhaji! However, I have been searching for the most flavorful one from the streets of Delhi NCR for almost the last two years!!! The streets of Delhi in fact, north India is rich in all kinds cuisines – Punjabi, Bengali, Chinese comprising of distinct flavours and spices and some considerable number of dishes. However, finding a good Pav Bhaji is a really a myth here. In my tenure of last twenty-four months, I explored various big restaurants to the small one to even roadside carts but I wasn’t able to pin down on the best one. Until I reached – Kumar Pav Bhaji at Krishna Nagar two weeks back!

The Krishna Nagar market known as the Lal quarter Market is renowned for its cloth amongst other things. Many businessmen have started their respective journey as cloth dealers for various types of garments. It is surely known for that and various kinds’ foodstuff it has to offer. Mostly all the vendors here sell different kinds of foodstuff that mostly is vegetarian and have got famous over the time. My friend and I, both food enthusiasts decided to venture out on a not so hot Monday afternoon 2 weeks back to try out as much as possible.

Thanks to Google Maps, we reached the place appropriately on time at 5 pm and our first destination was the ever famous Kumar Pav Bhaji corner that is renowned for its Pav Bhaji, Vada Pav, Masala Pavs! It is situated modestly at a corner with distinct aromas of Maharashtrian masalas floating around in the air.

It was Monday so all the shops were closed except the food joints, ordered one Pav bhaji and Bombay masala pav. Pav Bhaji was damn good, (it was like pyase ko pani mil gaya), with balanced spices and served hot, totally tantalizing my taste buds. I started by feeling the aroma of the bhaji and dipped the pav in it and had the first bite, my mind started dancing, after so many months having the taste like this just blew me. Masala Pav is pav fried with bhaji was same as the pav bhaji (obviously bhaji was same but it was not done properly as pav was a bit tough to tear apart and had chunks too big which were very chewy. Overall one of the best Pav Bhaji I have had in Delhi/ NCR. Price pav bhaji – 70rs, Bombay masala pav – 100 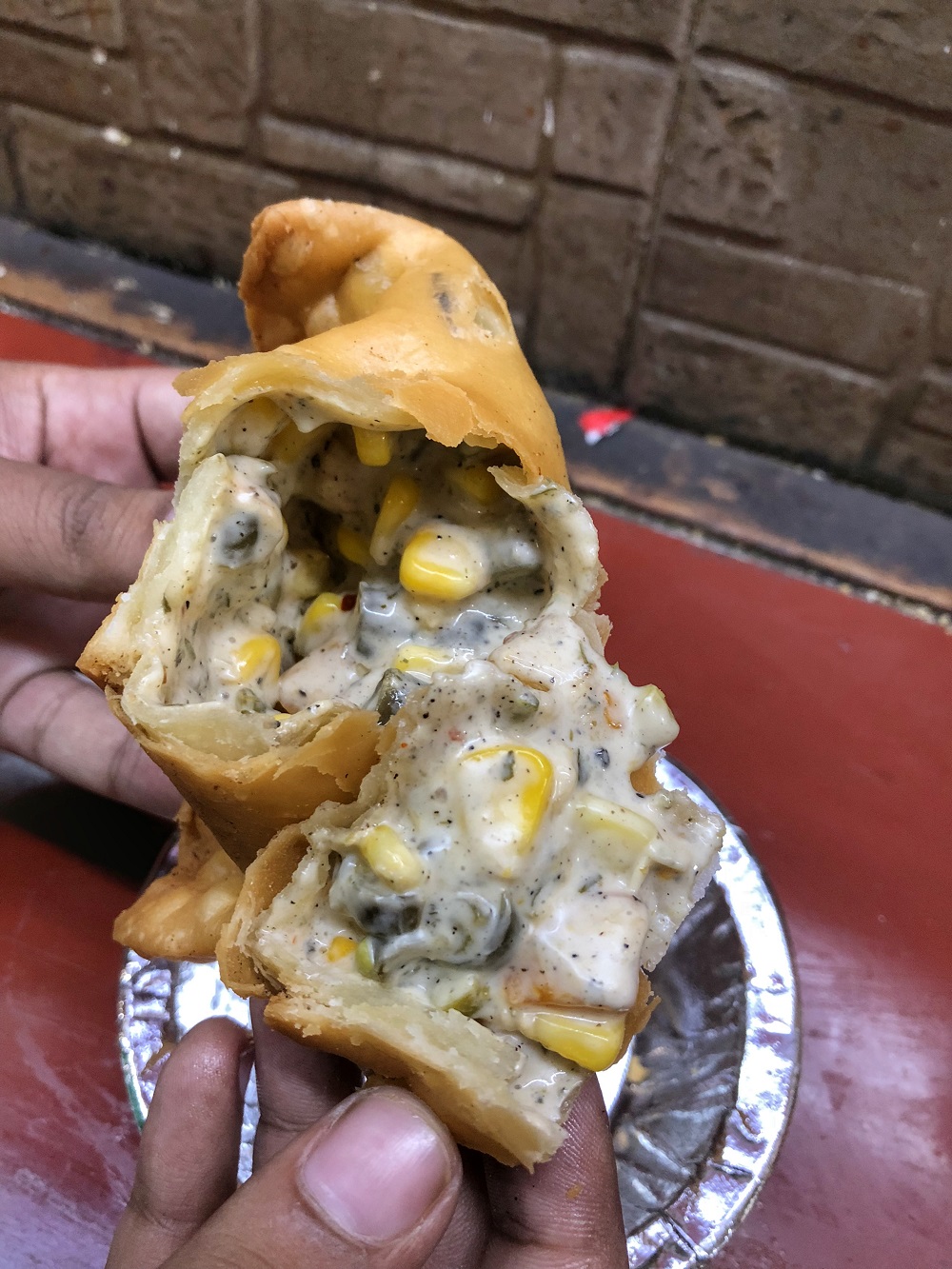 Samosa Hub or Amar Samosa Corner as it was previously called was our next destination. It is situated only 5 shops away from the Kumar Pav Bhaji Centre. This tiny shop sells around 40 or more kind of samosas in the savoury kinds and around 6-8 types of the sweet ones too! Whatever you can imagine as a vegetarian dish has been made into a type of filling for the samosa. From a Chilli Gobhi Samosa, pizza samosa, Paneer Makhni samosa to a pasta samosa & macaroni samosa, you would find it all here!!! This store has unmistakably changed the very definition of eating simple aloo samosa and has fulfilled all the wishes of the old as well as the new generation!

Food Chaapter was our next stop that is situated about 100 mts away from Kumar pav bhaji.   This small diner can seat up to 20 customers at a time and deals in a variety of Chaap (a form of soya bean) that is highly popular in the vegetarians. The Chaap items are available in both dry & gravy forms as well as highly gratifying Rolls. Here we called in for Achaari Afghani Tikka Chaap Roll as well a tandoori Chaap roll that was really delightful!!! Seeing our sheer enjoyment, the owner of the place asked us to try – KFC wings, Surmai fish fry and McDonald’s Chicken Nuggets respectively!!! At first, all three of us were quite amused as to how a vegetarian place deals with such a non – veg variety!!! However, it is the way these Chaap have been named after famous products as they closely match the tastes of the products indeed!!! Tasting these, turned our simple experience here into a peculiar one positively!!!

I spotted Lotan chole Kulche but the shop was closed, so I came next day in the morning to have it. I wanted to try this place for so long, tried channa Kulche – which consisted of Imli and Mirchi. Didn’t like the kulcha at all. – it is not as good as the ones sold at old Delhi by Lotannji himself and needs to improve soon as soon as possible!!!. It is served without onion or any other salad. Price 40r

There are more types of Chaap that are sold here around this area and Momos as well that I found out later (since most shops are closed on Monday) and shall be covered in the second part of my Krishna Nagar walk!!! The highlight of my visit was the Masala Pavs which is not to be missed in any case, if you are in close proximity to this area.

This site uses Akismet to reduce spam. Learn how your comment data is processed.